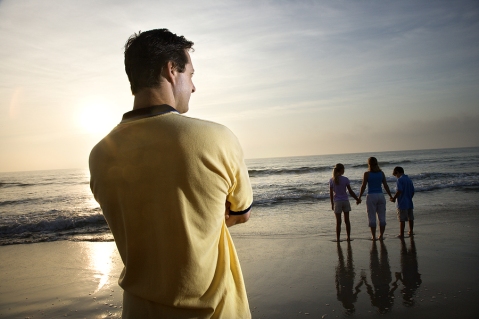 When you’ve been in the dating pool a while and/or you’ve reached a certain age it’s very likely you’ll date someone who’s had a failed marriage or long-term relationship. But that doesn’t mean that person won’t be a great partner. There are, however, some warning signs to look out for when dating a divorced man.

The first red flag is whether he describes himself as separated rather than divorced. Many women get sucked into a relationship (rebound anyone?) with a separated man, only to find out that he’s still married and actually working on his relationship or that he’s going to remain married, but still separated for the foreseeable future and he never has any plans on getting remarried. So anytime you hear the word separated, translate that into, ‘I’m not available for anything serious’.

The second warning sign is how fast he jumps into a very serious relationship. Oftentimes divorced men are only comfortable with relationships that become very serious, very quickly. They are putt off by the dating process of getting to know the other person and it’s important you slow things down. Even if he is keen to spend a lot of time with you or goes as far as suggesting moving in together, slowing down will give you both time to really get to know each other and see if you are actually compatible in the long run.

Having a negative attitude towards love or being emotionally unavailable is also a red flag. Granted, going through a divorce is one of the most traumatic things a person has to deal with, and it can leave that person bitter and closed off to love. So, if he’s still in a place where he can’t see himself to ever get married again – believe him. He’s not yet moved on and is still reeling from that experience. Let him go, he’s not ready.

Red flag number four is whether he’s depressed or has low self-esteem. As we said earlier divorce is traumatic and it can really take a toll on a person’s mental state and destroy their self-esteem. Divorce has the potential to make you feel like you are not worthy of a relationship, especially if you’ve been cheated on. But remember, it’s not your job to fix him, it’s not your job to try and bring him to a healthy place in his love life. He will need to find that path on his own.  Please avoid wasting too much time trying to rehabilitate him when you could be keeping your options open to other people.

If his ex-wife is still a huge part of his life that’s another warning sign you shouldn’t ignore. Now, we get it if he has children with her, they will need to make sure they have an active relationship and maybe even a friendship. But if you’re finding that she’s still a constant part of his life, he’s texting her on a constant basis, always seeing her more than probably would be appropriate, then keep your eyes wide open. There’s still a possibility he might want to win her back.

Kids but no kids

Speaking of children. How’s his relationship with his kids? If he has zero custody of his children doesn’t necessarily mean that there’s a major problem. Nonetheless, it’s a red flag. Typically, the relationship that someone has with their children is very coherent with the relationship they’ll have with other people in their life, but divorces are complicated and messy, so you really want to find out what actually went to get a clearer picture of him.

Now those are the biggest red flags we really want you to be looking for when you’re dating a divorced man, and if you don’t see any of those red flags, then great, go for it!  Just because a man was divorced doesn’t mean he’s damaged goods. On the contrary, he actually may have learned a lot from that first marriage and be at a point in his life where he has more clarity about what he wants in a relationship and in a woman.

This site uses Akismet to reduce spam. Learn how your comment data is processed.